VANCOUVER, BC–(28 Nov., 2016) – Pure Energy Minerals Limited (TSX VENTURE: PE) (FRANKFURT: A111EG) (OTCQB: PEMIF) (the “Company” or “Pure Energy”) is pleased to announce results from its systematic rock sampling program with Cypress Development Corporation (“Cypress”) on the Glory Claims (the “Property”) in Clayton Valley, Nevada. Pure Energy and Cypress geologists collected approximately 240 rock samples at a nominal 100 metre (330 feet) spacing covering much of the prospective sedimentary rocks on the Property (See Figure 1). In addition to confirming strong lithium values from previous Cypress sampling, the sampling program returned some of the highest lithium rock samples yet reported in Nevada. So far, sampling has extended the lithium rich zone into a corridor covering more than 3 square kilometers. Selected highlights of the sampling program are included below:

Company and Cypress geologists have also conducted the first geological mapping on the Property. The dominant rock type hosting the high lithium is Tertiary claystone, likely belonging to the Esmeralda Formation, which has been widely reported to host lithium associated with clays. Overlying the Tertiary sedimentary rocks (shown as Ts on Figure 1) is Quaternary aged alluvial material (Qal on Figure 1) that is sourced from older bedrock to the east. Mapping has determined that the younger alluvium covers portions of the lithium-rich Tertiary sediments, so the lithium-bearing sediments are likely to continue beneath the covering sediments.

Patrick Highsmith, Pure Energy Minerals CEO commented, “Our systematic sampling program with Cypress Development on the Glory Claims has exceeded our expectations by discovering some of the highest grade surface lithium in claystone that has been reported in Nevada. Traversing across the area, we can see that these lithium-rich rocks occur over a huge area. Since the dip is relatively flat, our geologists have also demonstrated that the lithium bearing units continue beneath younger alluvial material. Based on our realization that there is potential for significant tonnage of high-lithium rocks on the Property, we are excited to begin the next phase of work, which will test lithium extraction from these rocks.”

Discussion of Results
Pure Energy and Cypress designed the sampling grid to better understand and expand upon the areas of anomalous lithium identified in earlier sampling. The laboratory reported lithium plus more than 30 elements from a four-acid digestion and ICP-AES finish, while also reporting boron and lithium from an aqua regia digestion. While prospecting and mapping activities generated some of the new data, the new grid is important because it systematically covers large areas of Tertiary outcrop. In most cases, geologists collected representative samples on nominal 100-meter spacing.

Figure 1 is a map of the resulting lithium geochemical data on the Property. The area of Tertiary outcrop is consistently enriched in lithium, but younger Quaternary aged sediments cover the prospective sediments and extend into the Clayton Valley basin to the west. The geologists collected a line of samples near the northern property boundary as the Tertiary sediments re-emerge from the Quaternary cover. These turned out to be some of the highest-grade lithium samples in the survey. The technical team interprets this northern area of highly enriched lithium to connect beneath the covering sediments with the large anomalous lithium areas further south. The lithium potential also continues to the north, where Cypress controls the adjoining claim block. Including the Cypress sampling to the north, the corridor of high lithium in these Tertiary sediments is interpreted to extend for more than four kilometers.

Highly anomalous lithium occurs in all of the major rock types encountered on the property except for the conglomerate and gravel (Quaternary), but the abundant claystones consistently contain the highest lithium content. The map also includes an area of much older Paleozoic rocks that are not prospective for this type of lithium mineralization (dark areas in the upper middle of the map).

Patrick Highsmith, Certified Professional Geologist (AIPG CPG # 11702), is a qualified person as defined by NI 43-101, and has supervised the preparation of the scientific and technical information that forms the basis for this news release. Mr. Highsmith is not independent of the Company as he is an officer and director. 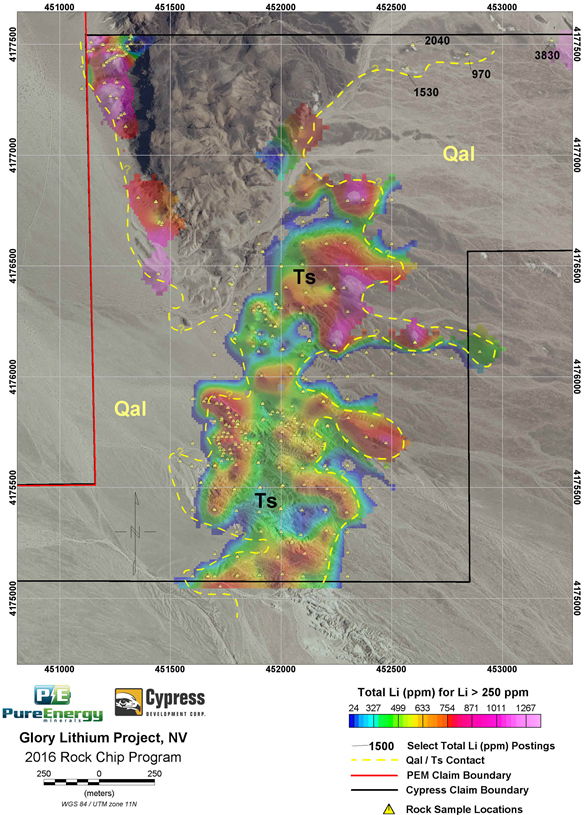 About Pure Energy Minerals Ltd.
Pure Energy is a lithium resource developer that is driven to become a low-cost supplier for the burgeoning lithium battery industry. While the Company is currently focused on the development of the CVS Lithium Brine Project and the adjoining Glory Lithium Clay Project in Clayton Valley, Nevada, it is actively evaluating new lithium targets in North and South America.
Pure Energy has developed core strengths in innovative development and processing technologies for lithium brines and lithium mineral deposits. The Company’s key attributes and activities include:
Generating positive results on a large land position with excellent infrastructure in a first-class mining jurisdiction: approx. 11,000 acres in four main claim groups in Clayton Valley, Esmeralda County, Nevada;
The only lithium brine resource in North America except for its neighbor, which is the only producing lithium operation in the United States (Albemarle’s Silver Peak lithium brine mine);
An inferred mineral resource containing approximately 816,000 metric tonnes of Lithium Carbonate Equivalent (LCE), reported in accordance with NI 43-101;
An advanced program of testing the efficacy and economics of modern environmentally-responsible processing technologies to convert the CVS brines into high purity lithium products for new energy storage uses; and
An active business development program, applying its expertise to the evaluation of new lithium targets around the world.

On behalf of the Board of Directors,

Forward Looking Statements: The information in this news release contains forward looking statements that are subject to a number of known and unknown risks, uncertainties and other factors that may cause actual results to differ materially from those anticipated in our forward looking statements. Factors that could cause such differences include: changes in world commodity markets, equity markets, costs and supply of materials relevant to the mining industry, change in government and changes to regulations affecting the mining industry. Forward-looking statements in this release may include statements regarding mineral processing, adaptation of test work to larger scale and/or future operational scales, estimates of reduced future capital and operating expenses, delivery of a preliminary economic assessment, future exploration programs, operation plans, geological interpretations, and mineral tenure issues. Although we believe the expectations reflected in our forward looking statements are reasonable, results may vary, and we cannot guarantee future results, levels of activity, performance or achievements.
Neither TSX Venture Exchange nor its Regulation Services Provider (as that term is defined in the policies of TSX Venture Exchange) accepts responsibility for the adequacy or accuracy of this release