DENVER, CO – (2 October, 2017) – Pure Energy Minerals Limited (TSX VENTURE: PE) (OTCQB: PEMIF) (the “Company” or “Pure Energy”) is pleased to announce positive initial results from the geophysical exploration program at its Terra Cotta Project (TCP or “the Project”) located on the Pocitos Salar in Salta Province, Argentina. Preliminary reviews of the geophysical data show extensive zones of high electrical conductivity that may indicate the presence of correspondingly high-density brine. The geophysical survey delineates a central basin that is 18km by 9km oriented along a northwest-southeast axis. The technical team interprets the basin to be filled with clastic sediments and evaporites that appear to be saturated over considerable thicknesses. Results from the geophysical survey combined with data collected during a surface-sampling program, which is currently underway, will be used to select targets for an upcoming drilling program. 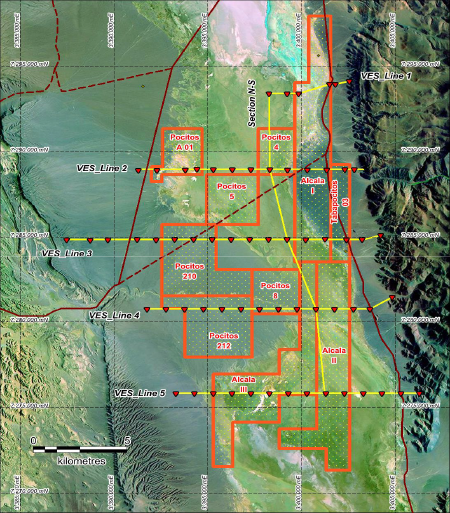 The geophysical exploration program consisted of a Vertical Electrical Sounding (VES) survey that included 63 points at nominal 1-kilometer spacing along five transects shown in the figure to the right. The transects span Pure Energy’s 13,000 hectare mining concession on the Pocitos Salar.

Conhidro S.R.L., a hydrogeological consultancy based in the city of Salta, Argentina, performed the work under contract to Pure Energy.

Walter Weinig, Pure Energy’s Vice President of Projects and Permitting, commented “Results from the geophysical program at the Terra Cotta Project are very encouraging. The data indicate the presence of potential lithium-bearing brine over a very large basin from near surface to depths greater than we had initially expected. We look forward to the results of the shallow brine-sampling program and the selection of drill targets. We are preparing the necessary permitting documents and plan to be drilling in the fourth quarter of this year.”

Pure Energy’s Terra Cotta Project is located in the heart of Argentina’s lithium-rich Puna Region. Significant proven deposits of lithium in brine occur approximately 32 km (20 miles) north at Rincon Salar and approximately 90 km (56 miles) south at Salar del Hombre Muerto. The Pocitos Salar is directly accessible by Salta Provincial Highway 17 and enjoys excellent infrastructure, including a gas pipeline and rail line on the eastern edge of the salar and a high voltage power line only 30 km (18 miles) to the north.

Walter Weinig, Professional Geologist and SME Registered Member (SME Registered Member # 4168729), is a qualified person as defined by NI 43-101 and supervised the preparation of the scientific and technical information that forms the basis for this news release. Mr. Weinig is not independent of the Company as he is an officer.

Pure Energy Minerals is a lithium resource developer that is driven to become a low-cost supplier for the growing lithium battery industry. The Company is developing the Clayton Valley (CV) Project in Clayton Valley, Nevada. The Company is also exploring a major new lithium brine project in the Lithium Triangle of South America, the Terra Cotta Project (“TCP”). The TCP is located on Pocitos Salar in Salta, Argentina, where it enjoys some of the best infrastructure and access of any lithium brine exploration project in Argentina.

On behalf of the Board of Directors,

The information in this news release contains forward looking statements that are subject to a number of known and unknown risks, uncertainties and other factors that may cause actual results to differ materially from those anticipated in our forward looking statements. Factors that could cause such differences include: changes in world commodity markets, equity markets, costs and supply of materials relevant to the mining industry, change in government and changes to regulations affecting the mining industry. Forward- looking statements in this release may include statements regarding planned test or exploration work, future exploration programs, operation plans, geological or geophysical interpretations, and mineral tenure issues. Although we believe the expectations reflected in our forward looking statements are reasonable, results may vary, and we cannot guarantee future results, levels of activity, performance or achievements.